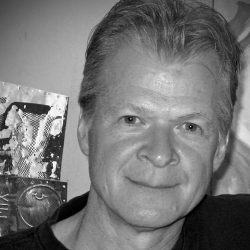 About the Artist: Phil Hazard

A native of Toledo Ohio, Phil Hazard holds his MFA in Painting from Bowling Green State University and his BA in Film & Design from the University of Toledo. He also studied screenwriting and film directing at New York University Film School.  Beginning in 1975, he was instrumental in developing the visionary impact of neon as a contemporary medium in New York City.  Hazard worked in the neon lighting industry for more than 25 years in NYC, eventually integrating neon and painting into his own unique fine art form. The inspiration for Philip Hazard’s paintings stem from personal obsessions, idealized pop culture and

ready-made collage materials.  Hazard describes his work as “Neon mixed media collage painting, a kind of electric pop art”. Hazard’s artwork has been exhibited nationally and internationally and is included in many public and private collections including The National Building Museum (Washington DC).  Hazard’s artwork has been published in many books and magazines, including the books “Tools as Art”, “Contemporary Neon” and the Japanese magazine “Pronto”.