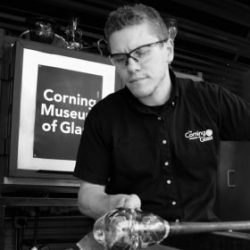 About the Artist: Ian Schmidt

Born in 1987 the son of glass artists Jack Schmidt and Shawn Messenger. Ian’s glass career has been fostered from a young age. Having grown up in Toledo, Ohio, home to the contemporary glass movement as well as industrial glass, both industry and art were present in his up bringing. The experience was something that he would later draw from when beginning to pursue glass as a career. "Observation is at times the best way to learn and helped me grow”. In 2006 Ian was admitted to the Rochester Institute of Technology's School for American Craftsmen, studying under Michael Rogers and Robin Cass he received his Bachelors of

Fine Arts degree in 2010. A traditional crafts school, it was a place of wildly different experiences. As one could walk from one end of the campus to the other seeing construction of a military jet fighter to the other where craft students were taught foundational skills.  After university he began to work for the Corning Museum of Glass as a demonstrating glass blower. For 4 years he worked in their outreach programs, traveling from the Mediterranean sea to Sydney, Australia.