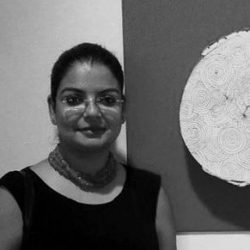 About the Artist: Ina Kaur

Ina Kaur is a multi media artist and practitioner who is a native of New Delhi, India. Kaur graduated with her Masters of Fine Arts Degree with honors from Purdue University, Indiana and received her Bachelors Degrees with Roll of Honor (Gold Medal) from Punjab University in Chandigarh, India. She is an active artist and her studio research has been showcased in numerous national and international exhibitions in the US, India and abroad in countries including Argentina, China, Finland, Hungary, Japan, Korea, the Netherlands, Scotland, South Africa, Spain, Sweden, and Turkey. Kaur has been a

recipient of numerous Grants, Residencies & Excellence Awards. She has taught at multiple universities in the USA and currently lives and works in Bangalore, India. Kaur’s research investigates how identities are defined and influenced by history, society and the culture of our immediate surrounding. In this global cultural environment where identities and boundaries converge, one seeks to identify oneself. Kaur explores a continuum of cross-cultural negotiation. Localism, globalism and hybridity have formed a new perspective for Kaur in conceptualizing and visualizing her work and identity.